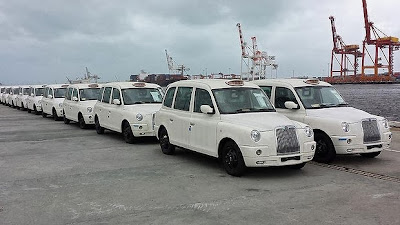 Londoners might be used to seeing their black cabs covered in every colour under the sun, as the city continually plays host to fleets of fully branded taxis.

However, those living 9,000 miles away in the West Australian city of Perth are about to enjoy the arrival of special white cabs, designed to tolerate warmer climates.

Just under 100 ex-demonstration TX4 taxis have arrived in Perth, marking the beginning of a 4-year trial. Coventry’s London Taxi Company are responsible for the production and shipping of these sun-seeking taxis, having been bought out of administration earlier this year by Chinese company Geely.

Fitted with an enhanced ventilation system and painted to avoid absorbing heat, if this initial taxi run is a success then they will also be introduced to the South East state of Victoria. CEO of the London Taxi Company’s Australian operations, Evan Simeon, described the response as already being “phenomenal”, with one operator in the city seeing a “stampede of drivers who want to be the first ones to buy a cab and partake in the trial”.

“We’ve had a lot of positive interest from ex-pats, both prospective customers and drivers; what has been especially gratifying are the offers from ex-pat London Taxi drivers who not only want to buy one, but have also offered their services to train our Australian drivers on everything from the service to vehicle operation.”

As the TX4 is the only vehicle in the world created solely for use as a taxi, they will allow drivers to add 4 more years to the lifespan of their current converted sedans, which are limited to 6 years. The cost of a TX4 is around 55,000 Australian dollars, but Simeon explains how

“drivers will receive a government-funded package, which in return for vehicle and usage data, will see them reimbursed for the normal weekly licence fee of AUS$200 for the first four years of ownership. This basically means that they will recoup most of the total cost of the vehicle.”